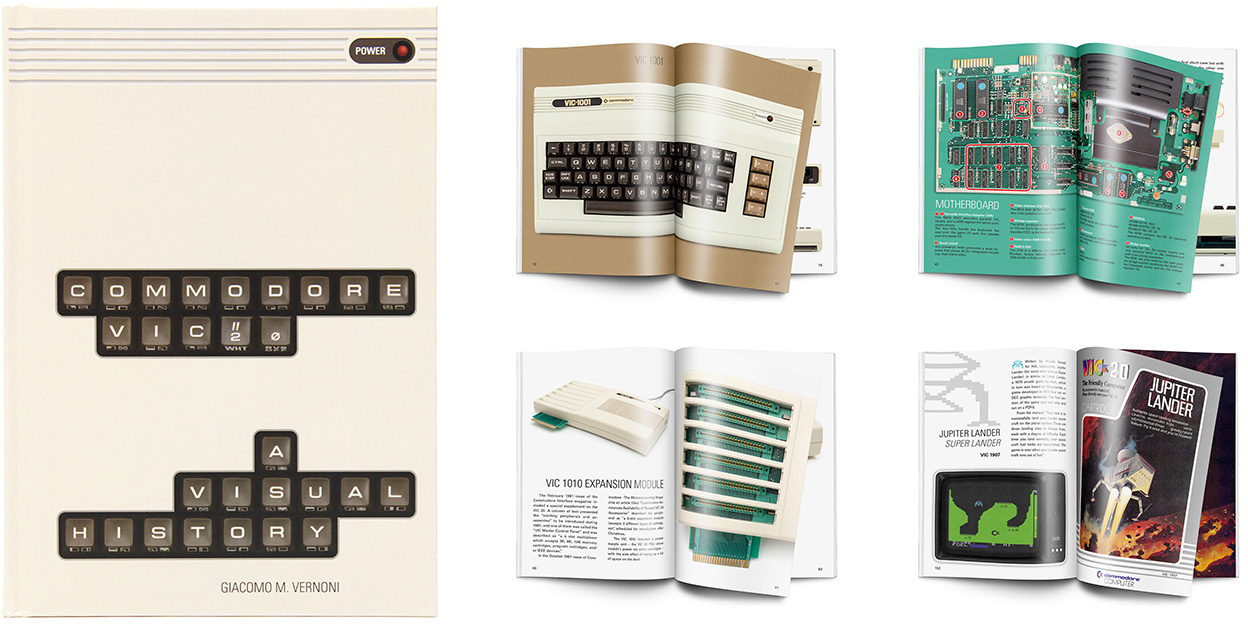 This book was funded by a Kickstarter campaign that I run in mid 2016. Printed in January 2017, it received enthusiastic reviews from the backers of the project.

The second half of the book presents all the Commodore games on cartridge, with cover scans, descriptions and screenshots. A few games feature a double page image, with all the text patiently removed in Photoshop to reveal the beauty of the original illustration. The scans have been professionally color corrected to remove the ink fading and the yellowing of the cardboard (all the games are more than 30 years old); every scratch has been removed to present the covers in their original splendour.

More information and buying options in the shop section of this site.
Hardcover book · PDF edition

The older contents of this article are shown below (all the links have been removed since they’re now obsolete).

After planning this project for months, I launched the Kickstarter campaign to fund my book on the Commodore VIC 20.

The campaign goal of €20,000 is needed to print about 500 copies of the book counting the English and Italian versions. During this first day of the campaign, the first backers supported my book, I got questions and comments from Kickstarter and from the social networks – I’m really thrilled!

This is the introduction I published on Kickstarter, if you’re interested in the book please read the full description on the site.

Commodore VIC 20: a visual history is a book about the computer that made Commodore enter the home market, with all its early peripherals. The VIC 20 was the first colour home computer to cost less than $300, the first to sell one million units, the first to have a modem for under $100, and the first approach to personal computing for a whole generation.

Many books celebrate the even more successful Commodore 64, but I felt that its little brother deserved some attention too.

“A visual history” doesn’t mean that there won’t be any text: every chapter will have an introduction, and many pictures will be described with a caption. “Visual” just means that the pictures are what makes this book special.

This campaign didn’t reach its goal. I will start a new campaign by the end of May, offering the book in English only.

The new campaign will start next Monday! I have made a teaser video for the campaign… or should I call it the iTeaser?

The new campaign is live. Back it and share it!

The campaign reached its €10,000 goal in one day, thanks to the support from the backers of the previous campaign.

The campaign is over and the book is funded. If you arrived late, I’ve set up a page on this site to preorder the book. You can pay with PayPal (you don’t need an account, you can use your credit card).

7 thoughts on “My book “Commodore VIC 20: A Visual History””